After a two-year hiatus due to the health crisis, Princess Grace Hospital brought back its traditional New Year address in early 2023.

Staff from the Principality’s healthcare facilities gathered on Tuesday 24 January to share a solemn yet convivial moment that offered an opportunity for a review of Princess Grace Hospital’s activities and a glimpse of the prospects on the horizon for the new year. They were joined by H.S.H. Prince Albert II, the President of the National Council, the President of the Crown Council, the Prince’s First Privy Counsellor, the Minister of Health and Social Affairs, the Mayor of Monaco, Advisors in the Prince’s Cabinet, the Deputy Chair of the Board of Directors, a representative from Cap d’Ail City Hall and numerous representatives from Monegasque institutions.

Benoîte Rousseau de Sevelinges, the Director of Princess Grace Hospital, wanted to congratulate staff at this state-of-the-art facility for their unwavering commitment to patients and the Monegasque healthcare system: “The COVID crisis showed the public what Princess Grace Hospital is all about. A responsive, effective facility with great technological and – above all – human resources, which residents, businesses and institutions in the Principality have recognised, appreciated and supported through the darkest months.”

Despite shortages of some specialists, it is very much a strong, agile hospital that is keen to continue along a path towards excellence and modernity, while retaining its core features: “well-staffed, skilled teams who take the time to care,” as the hospital’s Director describes them. 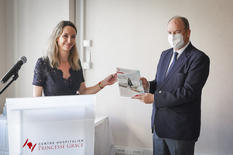 Having been applauded during the pandemic, healthcare workers have not been “forgotten or relegated to the background,” H.S.H. the Sovereign Prince assured them, as he paid tribute to their professionalism and reiterated his confidence in them and his determination to place health at the heart of public policy, for “without health, no other policy can be carried out.”

Significant and sustained funding has been provided by the Prince’s Government and generous donors, with 20 million euro invested in biomedical equipment over the last three years. Providing Princess Grace Hospital with the latest equipment in line with technological developments ensures that it has the resources to meet the challenges facing the hospital and retirement homes.
In 2021, the surgical robot was upgraded and a second robot purchased, positioning Princess Grace Hospital as one of the biggest centres for robotic gastrointestinal surgery and the largest centre for robotic gynaecological surgery in the local area. These facilities enable easier access to care and a more precise diagnosis through, for example, the Prostate Centre, the Pelvic Centre, the Breast Day Centre and the Thyroid Centre. Targeted programmes focusing on endometriosis, transient ischaemic attacks (TIAs) and spinal disorders will soon be in place as well.
In addition to all of this, the hospital has new interventional cardiology equipment, combining the advantages of 3D and magnetisation. It also has a partnership with the Monaco Scientific Centre and its platform for the diagnosis, testing and sequencing of communicable diseases.

Another strong symbol of the importance attached to health challenges in steering public policy was the appointment by Sovereign Ordinance on 13 April last year of Dr Robino as Minister of Health and Social Affairs. Dr Robino previously served as Head of the Medical Specialities and Haemodialysis Department at Princess Grace Hospital.

Quality of life at work

The discussion also offered an opportunity to highlight the social progress from which the 2,660 staff, 250 doctors and 105 students who make up the Princess Grace Hospital community now benefit. A team of civil servants for the Monegasque hospital has been set up to respond to the needs, ambitions and social model of Princess Grace Hospital in a bid to make Monaco’s public healthcare system ever more attractive. All staff doctors have seen accelerated career progression, and doctors are able to retire at 60.

The hospital in figures

The ongoing commitment of the Department of Public Works and the Princess Grace Hospital Construction Department has enabled a partial renovation of the psychiatry department, modernisation of the respiratory medicine department and establishment of the Surgical Intensive Care Unit.

In terms of the new hospital, the temporary relocations relating to the Princess Grace Pavilion are complete, with four floors of renovated inpatient facilities. The adult and child accident and emergency departments will be merged in spring, and will move into more functional premises, thanks to a donor.

With regard to the retirement homes, delivery of the first Cap Fleuri building has already allowed 78 residents to move into the new building.

The digitisation of information and digitised patient records are further challenges that are being successfully met, with a delivery rate of 90%. This will help to introduce new practices using artificial intelligence and decision-making tools, although vigilance is still required to combat hacking. To protect against this, Princess Grace Hospital is investing in systems which are particularly resistant to cyberattacks.