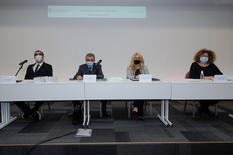 Despite the COVID-19 crisis, the Employment Tribunal held its annual general meeting on Tuesday 19 January.

The Tribunal hears disputes arising through the performance or termination of employment contracts. It also has the authority to rule on disagreements between employees regarding work issues and on appeals against decisions of the grading committee.

The Tribunal’s Special Commission met during the year and revised its internal rules of procedure, which were approved by the Secretary of Justice and subsequently by the Minister of State.

The Commission also worked on the introduction of a code of ethics for members of the Tribunal, a project that was warmly welcomed in advance by the Minister of Health and Social Affairs.

It should be noted that in terms of judicial activity, 2019/2020 saw a decline in petitions submitted to the Court Clerk (69 compared with 83), a significant drop in rulings issued (50 compared with 95) and a slight decrease in the backlog (280 cases pending compared with 285).

These figures can be explained by the health crisis resulting from the pandemic, which led to a lockdown from 17 March to 8 May 2020.

The current health restrictions meant that the ceremony was deprived of its usual pomp, however the Tribunal remains essential to the organisation of working life.