A tour of the stands set up by the Women’s Rights Committee was organised at the Fontvieille Shopping Centre on Friday 26 November 2021.

Among those visiting the stands were H.E. Pierre Dartout, Minister of State; Stéphane Valeri, President of the National Council; Robert Gelli, Secretary of Justice; Patrice Cellario, Minister of the Interior; Didier Gamerdinger, Minister of Health and Social Affairs; Anne Eastwood, High Commissioner for the Protection of Rights, Liberties and for Mediation; Chloé Boscagli-Leclercq, Deputy Mayor of Monaco; and Christine Giolitti, Vice President of the Economic, Social and Environmental Council.

This domestic abuse awareness campaign was intended to improve the public’s knowledge of the measures in place in Monaco and the organisations involved. 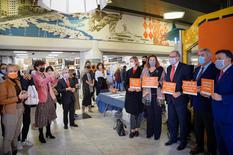 Several stands were set up by the key stakeholders who provide care for those who have experienced abuse: 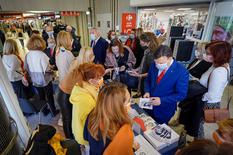