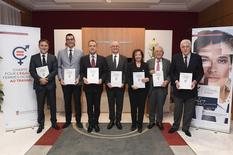 Women and Men at Work, which was proposed by the Ministry of Health and Social Affairs in conjunction with all the relevant stakeholders and the Women's Rights Committee.

This Charter formalises employers' commitment to promoting equality between women and men at work.  Signing up to the Charter is a sign of their willingness to take practical steps and to focus their efforts over the long term.

In his opening remarks, Didier Gamerdinger, Minister of Health and Social Affairs, stated, "I am deeply convinced that the equality of women and men is above all a state of mind.  I think we have this state of mind in Monaco, even though there is still some way to go.  That's why I have proposed to the representatives of the Principality's employers that they make a commitment to this end. To recognise the place of women in the world of work."

Before signing the Charter, the seven signatories each explained the reasons for their commitment:

H.E. Mr. Serge Telle, Minister of State, on behalf of civil servants and State officials:  "This is a major issue, for the women of Monaco, of course, but more broadly for the whole Principality, because promoting women's rights means fighting for the most basic values that unite and define us.  Promoting women's rights means working for justice, freedom and universality."

Georges Marsan, Mayor of Monaco, on behalf of the employees of Monaco City Hall:  "By signing this Charter, Monaco City Hall is confirming its commitment to this equality.  [ … ] While equality between women and men is more than respected at Monaco City Hall, this is unfortunately not the case everywhere, and we owe it to ourselves as an Institution to set an example and remain vigilant with regard to what is happening around us.  Monaco City Hall is very aware of this issue, and for several years it has supported the actions of associations that are involved in and are committed to working in favour of women."

Alberte Escande, President of the Monegasque Hospitality Industry Association:  "In a company, ambitious women are sometimes badly treated and judged in their place of work.  Equality between men and women means that, above and beyond gender, we first of all see the values of the human being.  Through this charter, the Minister of Health and Social Affairs is highlighting companies' commitment to respecting gender equality."

Philippe Ortelli, President of the Federation of Monegasque Businesses, on behalf of the affiliated trade unions:  "I believe in human wealth, regardless of gender, because in our companies we have to value competence.  In our economic fabric, which is mainly comprised of SMEs, employers have to fight to attract the most talented people, yet talent is not defined by gender.  That is why the FEDEM has decided to support the signing of this charter, because helping our companies to benefit from the best possible people is essential to our economic and social progress, that is to say beneficial to all, both women and men."

André Garino, President of the Board of Directors of the Princess Grace Hospital Centre, on behalf of the employees of the CHPG:  "The Princess Grace Hospital, as one of the Principality's major employers, is delighted to be associated with the signing of this agreement on gender equality at work.  This symbolic commitment sends a strong message for the health professionals at the hospital, where some professions are still mainly the preserve of women."

Fabien Deplanche, President of the Construction Sector Employers' Chamber:  "The diversity of our sector of activity can only be an asset, a richness, for our companies;  if these companies make this diversity more generalised, it will enable us to affirm the attractiveness of our profession.  Women make a major contribution to the harmonious development of our trades, some of which involve age-old traditional skills;  for the future of these trades, all those who can make a positive contribution are highly sought after and welcomed."

Etienne Franzi, President of the Monaco Association for Financial Activities:  "For equal work, equal pay.  This principle has been in place in banks for a long time.  It is based on the means of remuneration set out in the Collective Agreement. With regard to the famous "glass ceiling" preventing women from reaching certain levels of responsibility, things have progressed more slowly, but cracks are beginning to appear in it.   […] The Charter is therefore a perfect incentive to move forward."

CORONAVIRUS: No Positive Cases this Tuesday