Coronavirus - Monaco is Holding Out 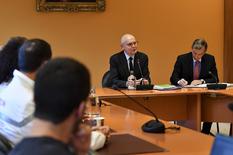 At the Government's press briefing this evening, Serge Telle, Minister of State, stated that this morning, at the Ecole de la Condamine school, the return to school had taken place with no worry or anxiety.  "Faced with this epidemic, we are ready and mobilised.  But the State cannot do everything.  It is also the concern of each and every one of us.  Through our behaviour, we can encourage or slow down the spread of the virus."

The Minister of State announced that he had also suggested to the President of the National Council that an information and discussion meeting be held in the coming days.

Regarding the health situation, which is still limited to a single positive case treated at the University of Nice Hospital, Didier Gamerdinger, Minister of Health and Social Affairs, welcomed the efficient administrative organisation of the system by the Government departments and the Princess Grace Hospital.  He announced that the staff of the Department of Health Affairs would be strengthened, in particular the medical staff, which has been increased from two to five health professionals.  They are the front line in answering the telephone hotline, thus making it possible to relieve pressure on the emergency numbers.  "A hundred and seventy-five calls today alone, an increasing number, which is normal, given that people have returned from holiday, especially in high-risk areas, and the removal of doubts that this leads to," he emphasised.

With regard to workers returning from risk areas, he stated that 236 requests for absence had been approved in the private sector, 62 in the public sector and 2 among the self-employed.

An assessment of the start of the school year given by Christophe Prat, Director General of the Ministry of Interior, showed the following:  20% absenteeism among the 5,600 pupils, including the declaration of 192 cases after a stay in a risk zone, 5% among the 858 teachers.  In crèches, nine children were absent for the same reasons.

Finally, concerning economic activity, particularly tourism, Jean Castellini, Minister of Finance and Economy, recalled "the pragmatic approach of the Authorities, which will favour a case-by-case study, without recommending the postponement or cancellation of professional events."

Discussions with young people about violence against women