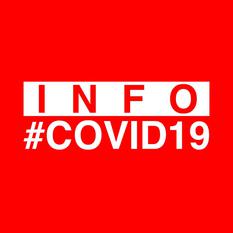 The fifteenth meeting of the COVID-19 Joint Monitoring Committee was held on Wednesday 16 September 2020 at the Ministry of State.  This meeting was the first for the Minister of State, Pierre Dartout, who had previously had an opportunity to discuss the health crisis and its socio-economic impacts with the President and members of the National Council.

For more than two hours, the Prince's Government and representatives of the National Council exchanged views on the decisions that have been taken, and are to be taken, in the context of the health crisis and its social and economic effects.

The Government and the National Council welcomed the setting up of the National Screening Centre as a result of the discussions that took place in a private session of the BR 2020 review, in particular a proposal by the elected representatives.  They were also able to visit this facility before the meeting of the Joint Monitoring Committee.  This centre, which is located in the Espace Léo Ferré, will be open to all Monegasque residents, persons covered by social security in Monaco and all schoolchildren in Monaco with a medical prescription and pre-arranged appointment.  The aim is to ensure the smooth running and better regulation of testing on the Principality's territory.  This will enable the results to be delivered quickly.

Thanks to this centre, weekly capacity will initially increase to 1,300 samples.  This is a result of close collaboration between the Princess Grace Hospital and the Department of Health Affairs, which have drawn upon nursing, administrative and logistical resources.  This scheme is also backed up by freelance and retired nurses.

In the long term, it is planned to increase the centre's capacity in line with the development of analysis capacities envisaged and planned in the coming weeks.  The National Screening Centre will only be accessible by appointment and with a medical prescription.

Patients will not have to make payments in advance.

In parallel with the National Screening Centre, the Monaco medical analysis laboratory will take samples for patients with or without a prescription, who have been requested to undergo PCR testing or who wish to be tested for personal reasons.

The Joint Committee then examined future testing capacities.  With regard to PCR tests, an increase is planned in the coming weeks, as soon as the automated equipment ordered by the State several months ago is received.  Other testing methods, such as saliva and antigen tests, which are more comfortable for the patient and give faster results than the PCR tests, will be implemented once they are authorised by the health authorities.

Discussions took place on the recommendations made by the Health/Science Group.  The Government and the National Council agreed that vaccination against seasonal flu should be a priority in the coming weeks.  It will be necessary to raise awareness among the population to this effect.  Measures will be adopted to facilitate vaccination.

Measures to increase protection within care homes have also been formulated.  The aim is to protect the population that is most at risk, while ensuring qualitative links with families.

Discussions also took place on the social and economic impact of the health crisis.  The Government and the National Council agreed on the importance of continuing and adapting economic support measures to the changing economic situation.  The State Recovery Plan thus provides for the extension until October 2020 of a certain number of direct aid measures, such as the CTTR (Total Temporary Layoff) scheme, the exemption from employers' contributions and the CARE (Economic Recovery Support Commission) mechanism, which grants direct financial aid following the analysis of a business' situation.  In practical terms, this involves, on the one hand, a double CARE payment in October and December, for entities which, in the autumn, can still provide proof of a significant drop in their turnover, and which received a first payment during the summer, and on the other hand, a benevolent review of rent for the fourth quarter by the State Property Authority of situations falling within the scope of CARE aid (mainly State tenants in the catering, tourism and events sectors).

Also discussed were the extension of distance working until December 2020, the safeguard clause for hiring an employee with 20 years' service in Monaco who has been made redundant following the health crisis and a relaxation of measures for recruiting young people registered with the Youth Employment Unit and the CID (Committee for Graduate Employment).

Finally, the Government announced that it would continue consultations with social partners in order to study the implementation of mechanisms to ensure the sustainability of employment, particularly in the hotel sector.

The Joint Committee then addressed questions relating to the 2020 Amending Budget and the 2021 Preliminary Budget, which will have to include changes in revenue and expenditure imposed by the Principality's changing economic situation.

The next meeting of the Joint Monitoring Committee will take place within 15 days.