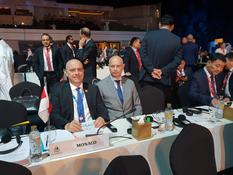 INTERPOL's 87th General Assembly was held in Dubai from 18 to 21 November 2018.  The Principality was represented at this meeting by a delegation comprised of Police Commissioner Richard Marangoni, and Superintendant Rémy Le Juste.

At this General Assembly, the Vice-President for Asia, Kim Jong Yang of Korea, was elected President of INTERPOL, with 62% of the votes.  In addition, the accession of Vanuatu and Kiribati to the organisation was adopted.

As a reminder, INTERPOL is the world's largest international police organisation, with 194 member countries.  Its aim is to enable police forces around the world to work together to make the world a safer place.

INTERPOL's General Assembly brings together delegates who are appointed by the governments of its member countries.  It is the Organisation's supreme governing body. The Assembly is held once a year and takes all the important decisions on general policy, the resources required for international cooperation, working methods, finances and INTERPOL's activities.  As part of its statutory activities, it elects the members of the Organisation's Executive Committee, including the President and Secretary General.

The Principality of Monaco became a member of INTERPOL in 1956.  Its participation in INTERPOL's activities makes it possible for the Police Department to establish close links with the police forces of member countries.  This international cooperation is particularly valuable in the context and development of the preventative policy implemented in Monaco.