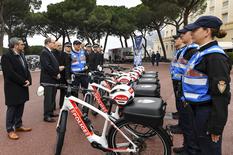 The Quality of Life Preservation Unit (UPCV) was recently presented to H.S.H. the Sovereign Prince on Place du Palais, in the presence of Christophe Prat, Director-General of the Ministry of the Interior, representing Patrice Cellario, Minister of the Interior, Richard Marangoni, Police Commissioner, and Brigadier Maxime Volto, Head of the Unit.

The primary role of this unit is to maintain and improve quality of life for residents of the Principality. More specifically, it works to improve traffic circulation and combat all types of noise pollution and anti-social behaviour. It also contributes to efforts to prevent fly-tipping. It practises a form of community policing whose aim is not, first and foremost, to crack down on behaviour, but to improve life together.

The mindset of the unit, which has 11 police officers, and the educational component of its approach have received a positive welcome from the public. Six weeks since it began operating, a significant impact has been felt in terms of traffic flow. The appeal to civic mindedness was decisive, while only a few isolated offences have been recorded.