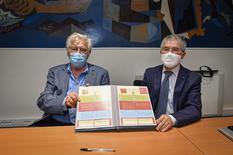 The establishment of these committees is part of the Police 2020 strategy, within which the “Monaco, a safe city” plan involves a comprehensive review designed to improve security practices among socio-economic partners to develop a shared relationship based on prevention.

The project leader, Chief Superintendent Christophe Haget, presented the current and future objectives and highlighted the need to strengthen the partnership between the Police Department and socio-economic actors in the Principality on security issues. Over the coming months, a website will be published to improve interaction between the Monegasque police and the members of the various committees. The number of these committees is set to increase during 2021, covering additional branches of the economy.