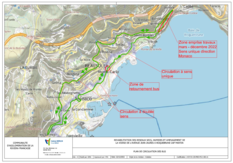 Starting on 3 October, the French Riviera Conurbation Community is undertaking a significant project to upgrade the water networks on Avenue Jean Jaurès in Roquebrune-Cap-Martin, the main access road to the east of the Principality.

The work will require one-way traffic restrictions to be introduced on Avenue Jean Jaurès heading towards Monaco, from the Quatre Chemins roundabout to the Saint Roman interchange from 3 October 2022.

To keep traffic moving, allow the work to progress and ensure the safety of workers for the duration of the project (18 months), various traffic plans are being put in place:
• Travelling towards Monaco: traffic on Avenue Jean Jaurès will be one way only from the Quatre Chemins roundabout to the intersection with Avenue Louis Laurens.

• Travelling towards Menton: a diversion is in place for cars, via Avenue Varavilla, Avenue du Président Kennedy and Avenue Notre Dame Bon Voyage.

Local residents, public transport users and commuters will notice an impact on their daily travel, particularly between Monaco and Menton.

Public transport routes will be subject to change; users should check the websites of their usual services. On the 100 route, the following stops travelling from Monaco to Menton will not be served from 3 October for the duration of the project: Les 4 Chemins, La Boucherie, La Tranchée and Saint Roman.