Presentation of Letters of Credence by H.E. Ms. Isabelle Berro-Amadeï, Ambassador of the Principality of Monaco to the Republic of Poland 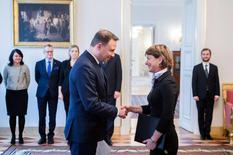 On 7 December 2015, H.E. Ms. Isabelle Berro-Amadeï presented her letters of credence to H.E. Mr. Andrzej Duda, accrediting her as Ambassador Extraordinary and Plenipotentiary to the President of the Republic of Poland.

At a private meeting, H.E. Mr. Andrzej Duda expressed his particular interest in developing relations with the Principality of Monaco.  He stated that he wished to see contact and synergies between the two countries strengthened in a variety of areas, such as research and development, schools and universities, and tourism and culture.

For her part, H.E. Ms. Isabelle Berro-Amadeï assured the Polish President of her commitment to strengthening the links that have existed between the Principality and Poland for many years.

The meeting concluded after H.E. Mr. Duda asked for his wishes of happiness and prosperity to be passed on to T.S.H. the Prince and Princess and members of the Royal Family.