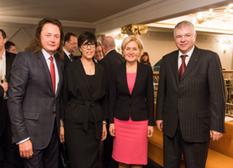 A Monegasque delegation led by Guillaume Rose and including representatives from the Tourist and Convention Authority and SBM, Monte-Carlo Philharmonic Orchestra First Violinist Zhang Zhang, and Chef Joël Garault visited Moscow from 1 to 4 March.

On Wednesday 2 March, a press lunch was held for journalists from lifestyle and food publications such as Condé Nast Traveller, Robb Report and Harper’s Bazaar, as well as a number of highly popular bloggers in Russia.

On behalf of H.S.H. the Sovereign Prince, H.E. Ms Pettiti awarded honorary distinctions to Ms Golodets and Mr Shvydkoy, who were both made Commanders in the Order of Saint Charles in recognition of their contribution to the success of “2015 – the Year of Russia in Monaco”.

The Ambassador announced that to mark the tenth anniversary of the establishment of diplomatic relations between the two countries, a “Week of Monaco in Russia” would be held in Moscow at the beginning of October 2016.

The following day, during a Monegasque dinner, the delegation presented Monaco as a destination to more than 90 Russian tourism professionals.

Guests at these events had an opportunity to enjoy dishes prepared by Mr Joël Garault and Mr Andrei Shmakov, head chefs at the Michelin-starred Monaco restaurant Le Vistamar and Russian restaurant Savva respectively. The musical accompaniment was provided by Zhang Zhang. 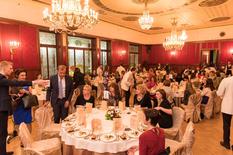