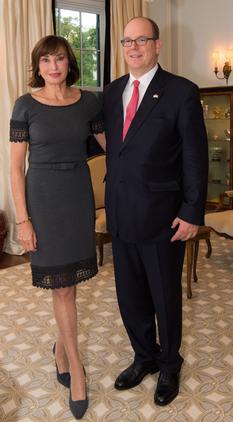 H.S.H. Prince Albert II salutes deep ties between Monaco and the United States at VIP reception WASHINGTON, D.C. (September 23, 2016) – It may be one of the world’s oldest sovereignties, and one of the United States’ most trusted allies, yet the Principality of Monaco’s diplomatic presence in Washington, D.C. is just a decade old.
To mark its decennial this year, the Embassy of Monaco celebrated last night with a cocktail reception in the presence of His Serene Highness Prince Albert II of Monaco at the Ambassador’s residence which was attended by VIP guests from the diplomatic, government, social, philanthropic, media and business communities. A message of congratulations acknowledging the close ties and bond of more than 150 years between the United States and Monaco was received from President Barack Obama.

When he inaugurated the Embassy, Prince Albert said the Embassy would facilitate even closer links between the United States and Monaco. “I believe that both of our countries have been fortunate to build many bridges of friendship over the years. By working together, we will not only keep these bridges strong, but we’ll keep them open forever.”
In recognising the efforts of Monaco’s Embassy and representational offices across the United States last night, His Serene Highness said “our American friends know how much we share the same values and ideals and are eager to work on the same issues…and will always be warmly welcomed in Monaco.”

“The Embassy might be one of the newest – and smallest - diplomatic missions in the nation’s capital but we are a positive, proactive team focused on supporting the vison of our Sovereign and his Princely Government, and promoting Monaco’s many cultural, philanthropic and business attributes to our friends across the United States. We share the same ideals and concerns, and we join with them - and the international community - to confront the great challenges of our time,” said Her Excellency Maguy Maccario Doyle, the Principality’s Ambassador to the United States.