Annual reception at the Embassy of Monaco in Italy 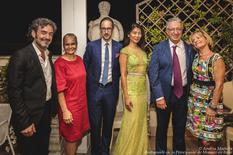 This year, the Embassy of Monaco in the Italian Republic held its annual reception to celebrate the anniversary of H.S.H. Prince Albert II’s accession on 12 July in the gardens and on the terrace of the Ambassador’s residence in Rome.

H.E. Mr Robert Fillon, Monaco’s Ambassador to Italy, and his wife, accompanied by diplomats from the Embassy, welcomed nearly 300 guests and friends of the Principality, including Mr Marco Podeschi, Minister of Education, Culture and Sport of the Republic of San Marino (the Embassy of Monaco in Italy is also accredited to the Republic of San Marino), numerous ambassadors to Rome, permanent representatives to the Food and Agriculture Organization (FAO) and World Food Programme (WFP), senior officials from Italian ministries, members of Monaco’s consular corps in Italy, Romania and San Marino, and Mr Marco Colasanti, Vice-President of the Italian branch of the Prince Albert II Foundation, on behalf of the Foundation.

In his speech, H.E. Mr Fillon underscored the significance and the long-standing nature of the links between Monaco and Italy, which are reflected in the exchange of resident ambassadors and by various bilateral agreements (including a recently signed agreement on installing a magistrate to liaise between the two countries). Monaco’s Ambassador also emphasised the role of the consular network in Italy, which was recently reorganised to make it more dynamic. The network’s purpose is both to facilitate contact with local political and economic stakeholders and to promote events designed to enhance the image and the appeal of the Principality beyond its borders.

The musical element of the reception was provided by Zhang Zhang, a Monte-Carlo Philharmonic Orchestra violinist, and Leo Giannola, guitarist with the band Caligagan.