Accreditation of H.E. Mr. Robert Fillon to the Republic of Malta 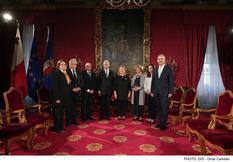 On 13 April 2018, H.E. Mr. Robert Fillon presented his Letters of Credence to H.E. Ms. Marie-Louise Coleiro Preca, President of the Republic of Malta.  As a reminder, H.E. Mr. Fillon is also Ambassador of Monaco to Italy, San Marino, Romania, Croatia and Slovenia.

This was followed by a short meeting, in the presence of the Ambassador's wife, the Consul of Monaco in Malta and close associates of the President.

At this meeting, H.E. Mr Fillon emphasised the Principality's wish to enrich the diplomatic and consular relations that have been established over many years between the two countries, through areas of common interest.  In this regard, the Ambassador mentioned the Principality's environmental concerns, with respect to the marine environment in general and the Mediterranean in particular, issues relating to culture (Valletta is "European Capital of Culture" for 2018), as well as those relating to sport (like Monaco, Malta participates in the "Games of the Small States of Europe").

On the occasion of this first visit to Malta, the Ambassador also had the opportunity to talk to H.E. Mr. Carmelo Abela, Minister of Foreign Affairs, and met Mr. Angelo Farrugia, Speaker of the House of Representatives (Parliament) and officials of the Chamber of Commerce who are responsible for international relations.

At a reception held by the Presidency of the Republic of Malta, which was attended by many important figures from the world of politics and business, H.E. Mr. Robert Fillon gave a speech in which he thanked the Maltese Authorities for their warm welcome and their time.  He informed them of the Principality's intention to intensify its relations with Malta in a spirit of cordial collaboration, experience sharing and participation in joint projects.

The Republic of Malta is the smallest State in the European Union.  It has a population of approximately 500,000 and enjoys good economic growth.   It belongs to both the Schengen Area and the Eurozone.