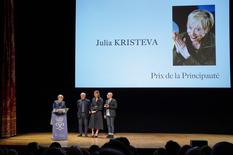 Julia Kristeva, who was born in Bulgaria , has lived and worked in France since 1966. She is a writer, psychoanalyst, professor emerita at Université Paris VII - Diderot and a full member of the Paris Psychoanalytic Society. She holds honorary doctorates from numerous universities in the United States, Canada and Europe, where she teaches regularly. A Commander of the Legion of Honour (2015), Commander of the Order of Merit (2011), and the first winner, in December 2004, of the Holberg  Prize (created by the Norwegian Government to make up for the lack of representation of the social sciences in the Nobel awards), Julia Kristeva was awarded the Hannah Arendt Prize in December 2006 and the Vaclav Havel Prize in 2008. She has authored some thirty books, including: Revolution in Poetic Language, Tales of Love, Powers of Horror: An Essay on Abjection, The Black Sun: Depression and Melancholia, Time and Sense: Proust and the Experience of Literature, the trilogy Female Genius: Hannah Arendt, Melanie Klein and Colette, Hatred and Forgiveness, This Incredible Need to Believe, Passions of Our Time, Marriage as a Fine Art (with Philippe Sollers) and novels including The Samurai, Murder in Byzantium, Teresa, My Love, and The Enchanted Clock. All of her work has been translated into English, and most of her books are available in the world’s major languages.

The Prince Pierre Foundation and the founding members of the Philosophical Encounters of Monaco are jointly responsible for awarding the Principality Prize on an annual basis to an author for their entire body of philosophical work, honouring a life of philosophical writing and an outstanding body of work which has opened up new paths in the field of philosophy and introduced alternative approaches in science, politics, theology, history, anthropology, ethics or psychoanalysis.

The winner of the Principality Prize is invited to give a lecture the year following their award.