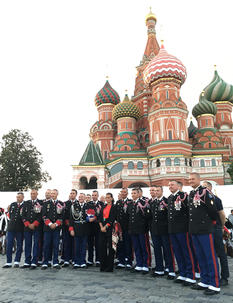 Caption: H.S.H. Princess Stéphanie was keen to meet musicians from the Palace Guards Orchestra before the opening of the Spasskaya Tower Festival. © Government Communication Department/Jean-Pierre Doria

H.S.H. Princess Stéphanie, accompanied by H.E. Ms Mireille Pettiti, Monaco’s Ambassador to Russia, attended the opening evening of the Spasskaya Tower International Military Music Festival on Red Square on Friday 24 August, at which the Palace Guards Orchestra had been invited to perform.

“It was important that I come to Moscow and support our orchestra, and it’s a source of great pride for me.”

Following the Palace Guards’ performance, which featured a new set based around the theme of “Changing the Guard”, the Princess, who is the Palace Guard’s patron, was able to see the Principality’s popularity for herself as the audience warmly applauded the 24 musicians and their conductor, Chief Warrant Officer Olivier Dréan.

The following day, on Saturday 25 August, a festive parade was held in the famous VDNKh park, with all 20 Russian and international orchestras and ensembles taking part, including orchestras representing the Russian Ministry of Defence and the Russian Navy, the Sri Lanka Military Orchestra and the Orchestra of the Royal Guard of the Sultanate of Oman. Once again, the appearance of the Palace Guards Orchestra provoked a great deal of enthusiasm, with much applause and many photographs taken.

The Festival will continue until 2 September, with more than 8,500 spectators expected to attend each evening’s performances.