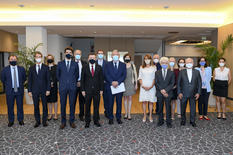 The Public Interest Archives Consultative Committee (CCAIP) met for the first time on Monday 28 June at the Novotel Hotel in Monte-Carlo. Led by the Minister of State, the session was also attended by Robert Gelli, Secretary of Justice, Stéphane Valeri, President of the National Council, Frédéric Genta, Country Chief Digital Officer, Françoise Gamerdinger, Director of Cultural Affairs, Michaël Bloche, Director of the National Archives Preparatory Team, Jean-Charles Curau, President of the CCAIP, and Thomas Fouilleron, Director of the Prince’s Palace Archives and Library.

The Commission’s role is to help the Prince’s Government and the National Archives Preparatory Team to establish the major outlines of the Principality’s archiving policy. In recent weeks, several organisations have already shared with the Preparatory Team their strong interest in depositing their archives with the State in the medium term, an option made possible by the Sovereign Ordinance issued on 25 March.

At the meeting, it was announced that in early June, the Prince’s Government, through the National Archives Preparatory Team, became a member of the International Council on Archives (ICA), established by UNESCO in 1948. The ICA’s remit is to promote archive conservation and access all over the world. “This is a strong signal of the Government’s support for the national archives project” said the Minister of State in his statement opening the session.

The Principality of Monaco’s accession to the ICA follows on from its accession to the Association Internationale des Archives Francophones (International Association of Francophone Archives), which is very active in training and cooperation, and whose members include the General Archives of the Kingdom of Belgium, the National Archives of Luxembourg, the French Interministerial Archives Service and the Swiss Federal Archives. This enhances the Principality of Monaco’s representation within the international archiving community.

Free bus trial in Monaco: have your say!