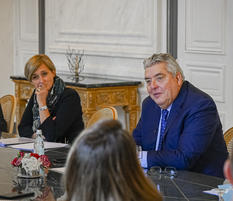 On Wednesday 16 November, the Minister of State, Pierre Dartout, and Celine Caron-Dagioni, Minister of Public Works, the Environment and Urban Development, unveiled the measures introduced by the State to manage energy demand in the Principality and reduce the financial impact of energy price rises. The measures apply to both consumers and businesses.

“These measures have been designed to enable the State to protect both residents and businesses by reducing the impact of energy bills, while also protecting the public finances,” said the Minister of State.

The price cap to be introduced from 1 January 2023 will limit energy price rises to:

15% for households and small businesses (those who have a supply contract with SMEG at the “blue” rate for less than 36 kVA).

35% (“yellow” rate) and 45% (“green” rate) for large businesses and major consumers, as an incentive to reduce their energy use whilst shielding them from almost half of the market price increase.

“It is important to keep in mind that, without the price cap, higher energy prices would cause the average end consumer to see their electricity bill rise by 75%. With the price cap, we have therefore considerably limited the real increase in energy bills for each category,” continued the Minister of State.

The measures are expected to cost the State around €30 million. They do not cover gas, since the national operator SMEG has already secured the necessary supplies of gas for 2023.

In practice, Pierre Dartout held up the Government as an example of efforts to reduce energy and electricity use. The standard temperature in public buildings is 19°C (+2 maximum), while lighting on public buildings and bus shelters is switched off from 10 pm, in a move that could encourage retailers and other businesses to turn off their own exterior lights in order to save energy.

As a sign of the Government’s commitment to setting an example, the Minister of State announced that a decision has been taken, in conjunction with Monaco City Hall which is responsible for the Christmas lights on Quai Albert Ier, to install a roller-skating rink in place of the ice rink, thought to be too energy-intensive. He added that Société des Bains de Mer is taking a similar step, by replacing the ice rink originally planned for the Place du Casino.

“We need to be conscious of the collective effort required. It’s common sense: we are all affected, and each of us can adopt energy-saving measures that make a difference. The efforts made and the results they bring need to be seen in the round,” explained Pierre Dartout.

Meanwhile, Céline Caron-Dagioni said that these “good practices” that the State is encouraging residents and businesses to adopt, are “pragmatic suggestions that do not require us to make big sacrifices in order to be effective. They seem simple, but we always forget to do them.”

The Minister also emphasised that the measures were the result of a concerted approach: “We consulted widely with businesses and major economic partners (including FEDEM, UCAM, SBM, AMAF, YCM, Grimaldi Forum) to find the right balance and ensure that these measures can be applied to each category of the population and the stakeholders in our economy,” explained Céline Caron-Dagioni.

The Government recommends that residents and businesses:

2-      Set thermostats appropriately depending on the situation and at 19°C (+3 maximum).

3-      Switch off lights, adjust air-conditioning and heating in offices and unoccupied premises (at night and at weekends in shops and offices, and also in homes if they are empty for extended periods).

4-      Refrain from using auxiliary or portable heaters in offices and homes with collective heating systems (this recommendation does not apply to elderly people living alone).

5-      Switch off devices rather than leaving them in stand-by mode (which represents 10% of households’ electricity consumption), by using sockets or power strips with switches or smart electrical panels.

Céline Caron-Dagioni concluded by saying: “When it comes to energy savings, the Prince’s Government is not here to force people, but to highlight the necessity. We will see how the situation develops going forward, but we are counting on everyone’s common sense and responsibility, and the example set by the State.”

A message from the Prince’s Government