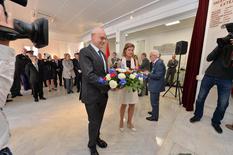 Serge Telle, Minister of State, accompanied by Patrice Cellario, Minister of Interior, attended the commemoration of 8 May 1945 at the Maison de France in Monaco, in the presence of Jacques Boisson, Secretary of State, representing H.S.H. the Sovereign Prince, Stéphane Valéri, President of the National Council, and numerous dignitaries.  With H.E. Ms. Marine de Carné-Trécesson, Ambassador of France to the Principality, he laid a wreath in memory of victims of the Second World War.

COVID-19 testing : General practitioners, private nurses and chemists to take over from today