The Minister of State

The Minister of State is assisted by five Ministers appointed by the Prince.

The Minister of State is appointed by the Prince. He represents the Prince and is the highest authority after the Prince.

He is charged with the administration of the Country and, for this purpose, draws upon the State’s executive services, in particular the Military Force.

The five Ministers head the specialized ministries of the Administration. They submit administrative matters prepared by their ministries to the Minister of State at meetings of the Council of Government.

The Ministries are subdivided into Departments and Offices.

Civil claims submitted to the Minister of State

As Head of the State’s executive services, the Minister of State is the competent authority to decide on civil claims, internal appeals and appeals to higher bodies, pursuant to the provisions of  OS 3.413 of 29 August 2011 laying down various measures on the relationship between the Administration and the public.

Applicants can thus have their claims or circumstances re-examined, or be informed of the reasons or grounds upon which an administrative decision has been based.

The current Minister of State is: His Excellency Mr Serge TELLE 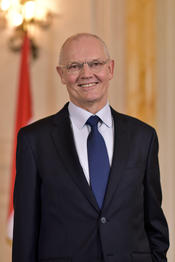 H.E. Mr. Serge Telle, Minister of State of the Principality, who was appointed by Sovereign Ordinance on 19 January 2016, will take up his duties on 1st February 2016.

Diploma from the Institute of Political Studies

Diploma from the National Institute of Oriental Languages and Civilizations (Swahili)

From 1984 to 1988, First Secretary at the Permanent Mission of France to the United Nations in New York, representative of France to the Third Committee (human rights/humanitarian law/international social issues).

From 1988 to 1992, Diplomatic Advisor in the Cabinet of Mr. Bernard Kouchner, Secretary of State to the Prime Minister with responsibility for humanitarian activities.

From 1992 to 1993, working for the Foreign and Commonwealth Office in London, with responsibility for Balkan Affairs.

From 1997 to 2002, technical advisor in the Cabinet of the Prime Minister with responsibility for Africa and the Middle East,

From 2002 to 2007, Consul General, then Ambassador Extraordinary and Plenipotentiary of France to Monaco.

From 2007 to 2008, Deputy Director of the Cabinet of Mr. Bernard Kouchner, Minister of Foreign and European Affairs.

From June 2008 to March 2012, Ambassador responsible for Euro-Mediterranean affairs, then the Union for the Mediterranean, Co-President of the monthly meeting of Ambassadors of the UfM.

From January 2013 to January 2015, Interministerial Delegate for the Mediterranean.

From 2011 to 2016, President of Avitem, Agency for Cities and Territories of the Mediterranean.

From February 2016, Minister of State of the Principality of Monaco.

Former Ministers of State of the Principality

Constitution of the Principality of 17 December 1962

Sovereign Ordinance no. 5.679 of 19 January 2016 concerning the appointment of the Minister of State

Ordinance no. 3.413 of 29 August 2011 concerning various measures pertaining to the relationship between the Government and its subjects