Test in the city… by night 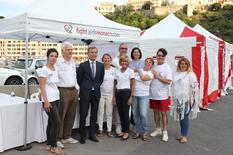 Didier Gamerdinger, Minister of Health and Social Affairs, surrounded by the Fight Aids Monaco team and in the presence of Ms Béatrice Fresko-Rolfo, member of the National Council. © Frédéric Nebinger

On Friday 15 June 2018, Fight Aids Monaco organised its annual HIV screening campaign, “Test in the city”, in the presence of H.S.H. Princess Stéphanie.

In response to H.S.H. Princess Stéphanie’s desire to provide accessible screening and prevention for young people during the summer period, the campaign took place for the first time between 7 pm and 2 am on the South Dock at the Port of Monaco.

The Fight Aids Monaco team welcomed numerous young people to the tents set up between the Rainier III swimming pool and the Brasserie de Monaco. Testing was carried out using the rapid diagnostic test technique, offering a quick and reliable result in just a few minutes.

The Princess Grace Hospital Emergency Unit was involved in the campaign, offering HIV screening to all patients who sought it during the evening.

Didier Gamerdinger, Minister of Health and Social Affairs, who came along to support the campaign, said:

“‘Test in the city’ is an initiative led and implemented by Fight Aids Monaco. I welcome this new initiative for the Principality’s young people, aimed at raising awareness of this important issue.”