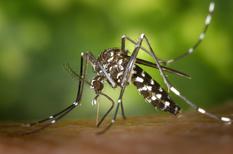 The Aedes albopictus mosquito, commonly known as the tiger mosquito, arrived in Menton in 2004 and has since colonised the Alpes-Maritimes region and the Principality of Monaco. The mosquito is capable of transmitting viral infections such as Chikungunya, Dengue and Zika.

How to recognise a tiger mosquito

The tiger mosquito, smaller than a 1 cent coin, measures less than a centimetre.

It is easily recognisable by the black and white stripes on its body and legs, and its completely black wings. Finally, since the tiger mosquito is active during the daytime, it is important to protect yourself throughout the day.

None of the diseases that can be carried by this insect (Chikungunya, Dengue and Zika) are directly transmissible from person to person. However, if a mosquito bites an infected person, it can suck up the virus and transfer it to a healthy person via a new bite.

Efforts to prevent these diseases from spreading as a result of an imported case (a person who has been in an endemic area and returns with the infection) are therefore based on the following recommendations:

On returning from a trip, a person is suspected of having Chikungunya or Dengue if they have the following symptoms:

-          at least one of the following: headache, joint pain, muscle pain, lumbago or pain behind the eyes.

Zika infection is suspected if a rash appears on the skin (with or without a fever) and at least two of the following symptoms are present: conjunctivitis, joint pain, muscle pain.

A blood test is used to confirm the diagnosis.

What to do in the event of doubt:

If in doubt, and while awaiting an emergency appointment with your doctor or the Princess Grace Hospital Emergency Unit, it is strongly recommended that the patient and those close to them use a repellent that is effective against Aedes albopictus.

CORONAVIRUS: No Positive Cases this Tuesday