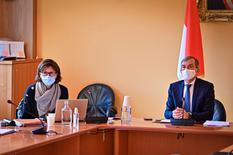 In addition to the State’s commitment through various recovery plans and extension of the strengthened provisions for total temporary layoff (CTTR) until spring 2021, the Prince’s Government has submitted a bill to the National Council on coordinated working time adjustment “to give the Principality a temporary additional tool to avoid redundancies.”

This morning, Didier Gamerdinger, Minister of Health and Social Affairs, and Pascale Pallanca, Director of Employment, briefed the press on the content of the bill, which has been subjected to a wide-ranging consultation process involving employers’ associations and trade unions since late summer.

“The time has come to mobilise everyone – employers, employees and public authorities – to tackle the decline in economic activity associated with the health situation and the resulting stresses on the employment market,” said Didier Gamerdinger by way of introduction. He continued: “For the Government, this is absolutely a social investment. Every job saved means security for a household, for a family. This legislation allows employees to keep their jobs and their full salaries. It allows employers to maintain their businesses through a flexible approach to working time, without the need to resort to redundancies.”

In principle, this bill makes provision for agreements on adjustments to working time negotiated between the employer and the employees concerned, either through the collective agreement for the sector, or by a company agreement. The employer makes changes to employees’ working hours to reflect the company’s business, while employees continue to receive their full salary during declines in business. Crucially, employers undertake not to make employees covered by the agreement on working time adjustment redundant for the period of the agreement, which can be between one and twelve months.

Several safeguards are in place to control the extended hours that will be worked to compensate for periods such as the current one where there is a decline to less than 39 hours per week: weekly hours may not exceed 46 averaged over a period of 12 weeks, no more than 48 hours may be worked in any one week and no more than 10 hours per day (unless authorised by the Labour Inspectorate for an exceptional reason). Employees must also have at least 10 hours of rest between two consecutive working days.

Following a National Council vote, the Government hopes that the first company agreements will emerge by January at the latest. “We are in a period of economic emergency. Now is the time to save our jobs” stressed Didier Gamerdinger in conclusion.

Vaccination against Seasonal Flu: The Third Phase of the Campaign