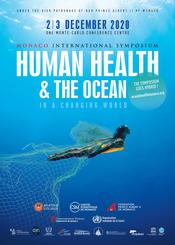 The first International Symposium on "HUMAN HEALTH AND THE OCEAN IN A CHANGING WORLD," organised jointly by Boston College, Monaco Scientific Centre and the Prince Albert II Foundation, on the subject of the links between human health and the oceans, will be held on 2 and 3 December in Monaco.

Following its postponement due to the COVID-19 pandemic, and given the current global health situation, this first event, held under the High Patronage of H.S.H. the Sovereign Prince, will take place on two afternoons, physically at "One Monte-Carlo" and by video conference.

The interactions between the ocean and human health are numerous, complex and yet largely unknown to the general public, interested parties and the scientific community, but the future of tomorrow's oceans will largely determine the health and well-being of all.

The programme will be based on three sessions, covering the following topics :

Twelve brief presentations (physical or virtual) by renowned international speakers will alternate with 12 short papers selected by the Symposium's Scientific Committee from the 95 scientific papers submitted by researchers in the various fields addressed.

The event will begin on 2 December at 2 p.m. and will end on 3 December at 6 p.m. with the Final Report and "Monaco's Declaration."

You can find out more about the Scientific Committee, the list of Speakers and the Conference Programme on the Symposium's web site:  http://www.oceanhealthmonaco.org/