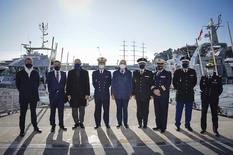 Senior officials from the French Maritime Gendarmerie* travelled to the Principality on board the patrol boat VSCSM Vesubie and were received by a Monegasque delegation.**

The aim of this meeting was to give an update on the training needs of members of the Monegasque Marine Police and the procedure to be followed to promote further cooperation.

The visit was also an opportunity for the French Gendarmes to board the Princess Gabriella patrol boat.  They were able to review the equipment and learn about the vessel's technical characteristics.

** The Minister of Interior, Patrice Cellario, the Director General of the Ministry of Interior, Christophe Prat, the Police Commissioner, Richard Marangoni, the Head of the Marine and Airport Police Division, Isabelle Castelli, and the Special Advisor to the Minister of Foreign Affairs and Cooperation, Jean-Marie Véran.  H.E. the Ambassador of France to Monaco, Laurent Stéfanini, and the Ambassador's First Counsellor, Mathieu Schuster, were also present to welcome the French delegation.