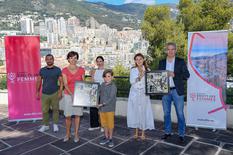 The campaign by the Women's Rights Committee, launched on the occasion of the last International Day for the Elimination of Violence against Women, was presented with two awards at the 19th Palmes de la communication ceremony on Monday 5 July.

It won two Palmes d'or awards out of the 22 prizes awarded - the first in the "institutional advertiser campaign" category of the year and the second awarded by the student jury.

The Palmes de la Communication recognises the best campaigns on the Côte d'Azur and in the South of France. The ceremony is organised by Azur Pro Com, a non-profit association for communications professionals from the Côte d'Azur.

The film from this campaign, which features a little boy as the main character, aimed to raise public awareness of domestic violence and its effects on children.

It was created and produced by two Monegasque agencies, Groupe Complus and Subliminal Pictures.

You can watch the film again via the following link:  https://bit.ly/3dUiK0M