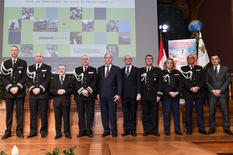 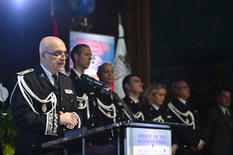 Police Commissioner Richard Marangoni gave his New Year address in the presence of H.S.H. the Sovereign Prince, Minister of State Serge Telle, Minister of the Interior Patrice Cellario, and a number of other personalities during the traditional event held in the conference room at the Oceanographic Museum.

The Sovereign Prince began his speech by dedicating the event to the memory of Police Captain Mathieu Launois, who recently passed away and who was unanimously admired for his human qualities and professional skills. The Prince continued: “Mr Commissioner, you have just mentioned the efforts of the 554 women and men who work every day within the Police Department to maintain the security that is so important to us, and which makes such a significant contribution to the Principality’s reputation. Our thanks to each and every one of you for this unwavering commitment. We are all aware that we cannot drop our guard in these turbulent times, a fact we were cruelly reminded of by the tragedy which occurred at the Strasbourg Christmas market. Please be assured that I am aware of the increased burden that this places upon you.”

Richard Marangoni recalled that during 2017–2018, overall crime had fallen by 10.43% and street crime by 22.44%, and that this trend continued through 2018 with an 11.36% drop in overall crime and a 35.29% reduction in street crime. The Police Commissioner then presented figures showing how administrative policing had been reinforced during 2018 in line with the Police 2020 plan: