On Thursday 6 May 2021, the members of the Monaco Fire and Emergency Service gathered on Place du Campanin in Fontvieille for a ceremony at which the young recruits were presented with their helmets and awards were given to deserving personnel who have recently distinguished themselves during important operations.

The entire ceremony took place under the command of Colonel Fassiaux, Chief of the Service, with Mr Christophe Prat, Director General of the Ministry of the Interior, Colonel Tony Varo, Supreme Commander of the Military Force, and Father Christian Venard, the Military Force’s Chaplain, who blessed the helmets, all in attendance.

The eight young recruits were from the class named after Commander Rafin, a former Chief of the Service, who came from the Paris Fire Brigade and served in the Principality from 1919 to 1937.

The recruits’ helmets were presented to them by their sponsors, solemnly marking the end of a five-month period of training. This powerful act symbolises their commitment as well as their sense of belonging to the Service. It also illustrates the fraternal bond that henceforth binds them to their 146 brothers in arms, who they now join in their mission to protect and safeguard people and property both in the Principality and in neighbouring communes.

Going forward, they will share the Service’s motto, “Courage – Devotion – Sacrifice”, with pride and dignity.

The ceremony then featured the presentation of awards to deserving personnel who have distinguished themselves in recent operations. 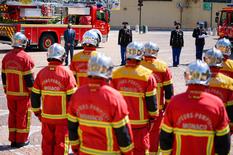