Exchanges between the Marine Police of Monaco and the Bandol SNSM 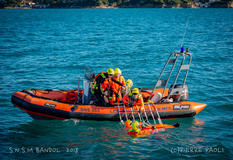 An exchange project, initiated in 2016 at the request of the Principality, between Monaco's Marine Police and the Bandol National Sea Rescue Society (SNSM), has just been implemented.

At a three-day session in Bandol on 23, 24 and 25 November 2018, rescue techniques were described in detail at theoretical sessions led by French national trainers from the Bandol SNSM station, and then put into practice at sea on board a rescue ship. Exercises involving a search for a man overboard and a boat in difficulty, towing a ship and overseeing the evacuation of injured and sick victims on board a ship and in the water were carried out in conditions that simulated real life.

The aim of these exchanges is to familiarise the crews of Monaco's Marine Police with the SNSM's rescue techniques, with a view to perfecting and standardising these techniques, in order to facilitate exchanges with CROSSMed and coordination with neighbouring SNSM stations in the event of joint operations.

Two other sessions will be held in Bandol in the coming months.

Easing the Lockdown: Checks at the Monegasque Border

CORONAVIRUS : Lockdown extended to 3 May inclusive