Preliminary budget for 2021 will show deficit of €114.5 million : “The goal is to safeguard Monaco’s economic and social model” 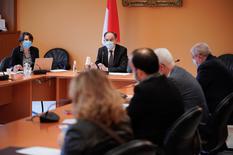 “This is a budget which has been put together against a background of economic uncertainty, but it is proactive and based on the main pillars of the Government’s policy, such as the Economic Recovery and Job Support Plan, and the National Housing Plan for Monegasques."

Minister of Finance and Economy Jean Castellini, accompanied by Sophie Vatrican, Director of the Department of Budget and Treasury, gave the press an overview of the draft preliminary budget for 2021 this morning. The draft will be submitted to the National Council for review and a vote next month.

In putting together this preliminary budget, the Prince’s Government sought to be cautious both in terms of revenue, which could be impacted by the health crisis to a greater or lesser extent, and in terms of expenditure, with government departments asked to pay scrupulous attention to operating costs to enable budgetary resources to be focused on investing for the benefit of Monegasque nationals and residents.

For the first time since 2015, the preliminary budget shows a deficit, amounting to €114.5 million. “While the Principality ultimately closed every financial year between 2012 and 2019 with a surplus, this will not be the case in 2020 – when a deficit of €165 million was approved as part of the second amended budget – nor in 2021. Our goal nonetheless remains to return to a balanced budget as soon as possible, and to safeguard the Principality’s economic and social model,” said Jean Castellini.

Revenue is expected to be down by around €40 million in 2021 compared with last year, primarily as a result of a decrease in VAT related to consumption. Expenditure is increasing by 5%, or €79 million. Operating costs have been kept in check thanks to efforts on the part of government departments to make savings, but investment expenditure continues to rise “because this expenditure is for the country’s future.”

The Minister set out the key challenges underlined by the priorities of this budget :

Jean Castellini also explained that the preliminary budget was intended to be “pragmatic and flexible”, and included measures discussed in consultation with the National Council, such as the Economic Recovery Plan for Monaco, developed to cover 2020 and 2021, and the continuation of the strengthened provisions for total temporary layoff until the end of March 2021 (budget of €40 million).