The First Residents Have Returned to the "Jardins d'Apolline" 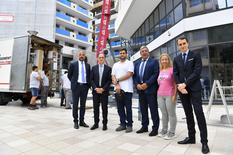 The programme enabling residents of Block D of the "Jardins d'Apolline" to return to their homes has begun today…  In the presence of Jean Castellini, Minister of Finance and Economy, Rémy Rolland, Director of the State Property Authority, Franck Lobono, President of the Housing Commission of the National Council, Albert Croési, Head of Mission to H.E. the Minister of State, and Céline Lubert, President of the Residents' Association of the Jardins d'Apolline, the first residents returned to their renovated apartments, as announced, a few weeks in advance of the initial deadline.

The Minister stated, "In the summer of 2017, the Prince's Government undertook to refurbish all the apartments at the Jardins d'Apolline to an as-new condition as soon as possible. To this end, the State Departments concerned worked on this issue with the support of Mr. Albert Croési, who was fully involved on a daily basis. Good management of the site by the company responsible means is it possible to start moving residents back into their accommodation from today, in advance of the provisional deadline. It is expected that the reinstatement of residents in Block D will be completed by the end of January 2020 and of Block B by early April 2020.  This will be followed by Blocks C and A. I would like to highlight the constructive discussions that took place with the National Council on this very sensitive issue.  The role of the Association of Residents and Traders of the Jardins d'Apolline should also be acknowledged. "