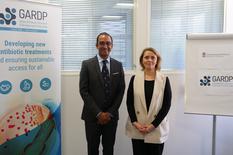 Geneva, 29 May 2019 – At the 72nd World Health Assembly, during which antimicrobial resistance was a priority topic on the agenda, the Global Antibiotic Research and Development Partnership (GARDP) announced a contribution from the Prince’s Government to support its programme to control neonatal sepsis in South Africa, where antimicrobial resistance is a significant problem.

Infectious diseases are the main cause of death and disability in children and more than half of all deaths in children under five are of newborns (up to 28 days). It is estimated that drug-resistant infections are responsible for 214,000 neonatal sepsis deaths every year (*). The situation is made worse still by the increase in antimicrobial resistance.

“GARDP would like to thank the Principality of Monaco for its support,” said Dr Manica Balasegaram, Executive Director of GARDP. “This funding meets an urgent public health need: the development of antibiotics to treat neonatal sepsis. The network of clinical trials in South Africa will also be part of a global children’s antibiotics platform.”

The Monegasque funding will help to develop new antibiotic treatments and a scientific database for the effective use of antibiotics to improve medical care for newborns and children.

“Monaco is delighted to be part of the community of nations supporting this GARDP initiative,” emphasised Ms Bénédicte Schutz, Director of International Cooperation for the Prince’s Government. “Reducing infant mortality, which is what this is about, remains a priority for the Principality’s official development assistance, and we are pleased to note that South Africa, a partner country for Monaco’s International Cooperation, is at the heart of this initiative.”

The Global Antibiotic Research and Development Partnership (GARDP) is a non-profit research and development body that addresses global public health needs by developing new or improved antibiotic treatments, while endeavouring to ensure their sustainable access. Launched by the World Health Organization (WHO) and the Drugs for Neglected Diseases initiative (DNDi), GARDP is an important element of WHO’s Global Action Plan on Antimicrobial Resistance, which calls for new public–private partnerships to encourage research and development of new antimicrobial agents and diagnostics.

The Government of the Principality of Monaco

The international development policy of the Prince’s Government, which has made combatting poverty its priority, provides support to around 130 projects every year in 11 countries, primarily least developed countries (Madagascar, Mali, Burkina Faso, Niger, Mauritania, Senegal and Burundi). Assistance focuses on four key areas of intervention that are essential for developing human capital: health, education, socio-economic inclusion and, since 2018, food security. It prioritises the most vulnerable groups (women, children, refugees and people with disabilities). https://cooperation-monaco.gouv.mc