WHO - Monaco Takes Part in the 72nd World Health Assembly 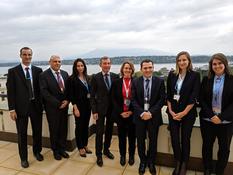 Didier Gamerdinger, Minister of Health and Social Affairs with the Monegasque delegation ©DR

A Monegasque delegation*, led by Didier Gamerdinger, Minister of Health and Social Affairs, is taking part in the 72nd World Health Assembly (WHA) of the World Health Organization (WHO), which is being held in Geneva from 20 to 28 May 2019.

This Assembly brings together the 194 Member States, observers and partner organisations, and more than 4,000 delegates are attending.

The general theme of the debate this year is "Universal Health Coverage - Leaving No One Behind."  In his speech, Mr. Gamerdinger reviewed the measures put in place in the Principality to provide the best healthcare for the entire Monegasque population, with an approach based on the needs of a person at all stages of life.

He also referred to the action undertaken by the Prince's Government as part of its international cooperation to achieve the objective of universal health coverage at the global level.

In addition to the usual technical and health issues, this 72nd World Health Assembly will have to adopt the Organization's 2020-2021 Programme Budget, in line with the objectives of the 2030 Sustainable Development Agenda.

As a reminder, the World Health Assembly is the WHO's supreme decision-making body.  It is responsible for defining the Organization's policy and approving its budgets.  The WHO is the main multilateral partner of the Prince's Government in international cooperation.