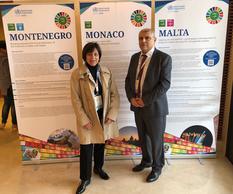 Isabelle Rosabrunetto, Director-General of the Ministry of Foreign Affairs and Cooperation, and Alexandre Bordero, Director of Health Affairs© DR

A Monegasque delegation, comprised of Isabelle Rosabrunetto, Director-General of the Ministry of Foreign Affairs and Cooperation, and Alexandre Bordero, Director of Health Affairs, took part in the WHO's 6th High-Level Meeting of Small Countries of Europe, held from 31 March to 2 April 2019 in San Marino.

The meeting, which was opened by Dr. Tedros Adhanom Ghebreyesus, Director-General of the WHO, focussed on "Equity and Sustainable Development:  Keeping People at the Centre."

Following a recent report on the impact of socio-economic factors on health - which will be the subject of a conference in Ljubljana, Slovenia, on 11 June 2019 - the WHO recalled that maintaining a population in good health is an investment for a country and not an additional expense, and that socio-economic factors are crucial (differences in life expectancy can be identified between regions, districts of a city, etc.).

Monaco outlined its social policy, which is a means of reducing inequalities and promoting social and intergenerational diversity.

It should be noted that, in parallel with this 6th meeting, the Monegasque Delegation and the Ambassador of Monaco accredited to San Marino took part in the investiture ceremony of the new Captains Regent;  this is an important event for San Marino, which takes place every six months, and has done so since the 13th century.