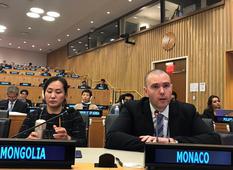 Jean-Laurent Imbert, First Secretary at Monaco’s Permanent Representation to the United Nations, gave a speech during the general debate of the UN General Assembly’s Economic and Financial Committee (Second Committee), which addresses sustainable development, among other issues.

The Committee has an important role to play this year, following on from a week of high-level debates focused on climate, the Sustainable Development Goals and financing for development.

After reaffirming the Principality’s commitments on greenhouse gas emissions, Mr Imbert emphasised the significant efforts – including financial efforts – that the Prince’s Government is making, which will contribute to recapitalising the Green Climate Fund to the tune of EUR 3 million for the period 2020–2022.

In addition to recalling Monaco’s involvement in the Nature-Based Solutions Coalition and in the IPCC report on the oceans and cryosphere, this speech was an opportunity to set out the priorities for the coming year, which will be the oceans and biodiversity, as dictated by the international agenda.*