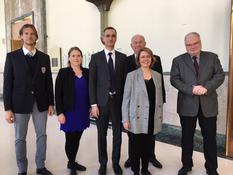 A Monegasque delegation took part in the extraordinary session of the UNESCO Intergovernmental Committee for Physical Education and Sport (CIGEPS), which met for the first time on 28 and 29 March 2019, in Geneva.

In her opening speech at the meeting, H.E. Ms. Lanteri, Ambassador, Permanent Representative of Monaco and a member of the Group of Friends of Sport, highlighted the Principality's action to promote sport at both the national and international levels and emphasised how sport can contribute to achieving the Sustainable Development Goals.

As a reminder, the Committee, which was established in 1978, has a mandate to develop the role and value of sport and promote its inclusion in public policy.  At this session, the CIGEPS is meeting to discuss the implementation of the Kazan Action Plan, the revision of its Statutes and strengthening the action of the United Nations system and Member States in promoting sport for development and peace.