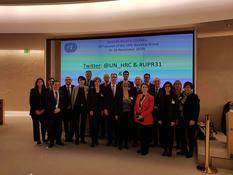 The Minister presented the Principality’s national report and responded to questions from Human Rights Council member states and observers. He was supported by a delegation of 18 people, including the Secretary of Justice, Laurent Anselmi, Monaco’s Ambassador and Permanent Representative to the Office of the United Nations in Geneva, H.E. Ms Carole Lanteri, and the Chair of the National Council’s Committee on Foreign Affairs, José Badia. The exercise provided an opportunity to reiterate the commitment of the Monegasque authorities to promoting and protecting human rights, and to report on the progress achieved in this area since the last UPR.

The process, preparations for which have involved a number of government departments, will conclude with the adoption of a report at the 40th session of the Human Rights Council

(25 February to 22 March 2019), a document that will reflect the Prince’s Government’s position on each of the recommendations issued.

The UPR is a mechanism which was introduced within the framework of the UN Human Rights Council in 2006. It allows the Council’s member states and observers to review the human rights policies of their peers and to make recommendations about how these policies can be improved. All UN member states are subject to a UPR once every five years.