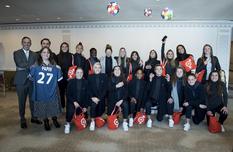 As a side-event of the work of the 63rd session of the Commission on the Status of Women, and at the invitation of the Permanent Mission of the Principality of Monaco, the Girondins de Bordeaux women's team visited the United Nations on 20 March, as part of their American tour.

This visit was an opportunity to discuss the place and role of sport, as well as the UN's actions with regard to the implementation of SDG 5 (Gender Equality).

The President of the Commission on the Status of Women, the Director of the UN Women's Programmes, the owner of the Girondins de Bordeaux Football Club and the Canadian international player spoke at this meeting.  They all confirmed the importance of sport for its increasing contribution to development and peace through the values of tolerance and respect that it encourages, the empowerment of women and young people, individuals and the community and the achievement of health, education and social inclusion objectives.

Many important figures attended this event, including Ms. Anita DeFrantz, Vice-President of the IOC, Mr. Jean-Pierre Papin, 1991 winner of the Ballon d’or award, Ms. Nascimento, daughter of the best player in the history of football - the Brazilian player Pele - and representatives of the countries in which the female players will take part in connection with the next football World Cup, to be held in France (France, Canada, New Zealand, Switzerland and Brazil). 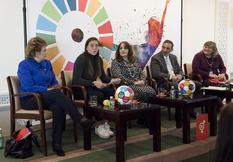