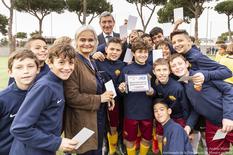 Ms. Martine Garcia-Mascarenhas and Mr. Bruno Molea with the AS Roma 8-12 team, winners of the 1st International Day of Sport for Development and Peace Trophy © Andrea Martella, Embassy of Monaco in Italy

This year, to celebrate the "International Day of Sport for Development and Peace," which will take place on Saturday 6 April, the Embassy of Monaco in Italy called upon the Italian Culture and Sports Association (AICS), a sports and social promotion organisation that is recognised by the Italian National Olympic Committee (CONI).

A junior football tournament was held on Tuesday 2 April by the football section of the AICS.  It was attended by its President, Mr. Bruno Molea, who is also President of the International Workers and Amateurs in Sport Confederation (CSIT).

The AS Roma Club won the trophy, which was created to symbolise this Day.  Ms. Martine Garcia-Mascarenhas, Second Secretary at the Embassy of Monaco in Italy, presented the trophy on behalf of the Embassy.  She recalled the importance of this Day and the commitment of H.S.H. the Sovereign Prince in this field.

All the participants then enthusiastically waved the #WhiteCard, in support of the campaign promoted by the Peace and Sport Association, to celebrate this Day of Sport for Development and Peace. 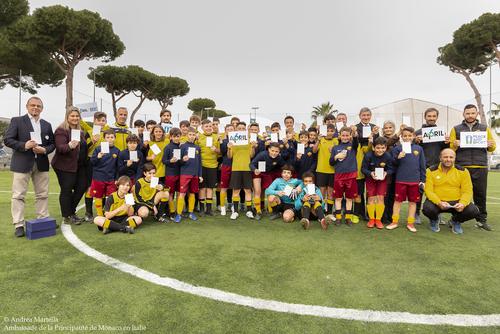