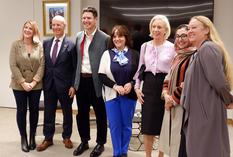 On 10 March, the Permanent Representatives of Afghanistan and Monaco to the United Nations, Ms. Adela Raz and Ms. Isabelle Picco, held a screening of the documentary "Learning to Skateboard in a Warzone (if you are a girl)," which was recently awarded an Oscar.

This short film was directed by Carol Dysinger and tells the story of young Afghan girls who are learning to read, write and skateboard, thanks to the work of the NGO Skateistan in Kabul, Afghanistan.  This organisation, founded by Oliver Percovich in 2007, was recognised by Peace and Sport (Best NGO in 2009 and "Image of the Year" in 2011), before going on to receive the International Olympic Committee's "World Award 2020" as part of the Women and Sport Awards.  Skateistan offers young girls a unique opportunity to benefit from an education, while developing their agility in a covered skatepark.  This NGO is also active in South Africa and Cambodia.

After the screening, participants were able to discuss the impact of this innovative programme, which is host to girls aged 5 to 17 from particularly disadvantaged backgrounds.