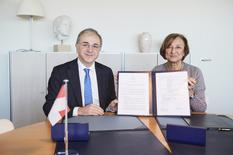 Through this agreement, Monaco is reaffirming its support for the Council of Europe by committing to contribute a minimum of €240,000 to fund the institution’s activities for the period 2020–2021.

The programmes that the Prince’s Government is supporting financially are in line with the Principality’s priority areas of engagement on the international stage and, more specifically, cover five areas in which the Council of Europe has demonstrated recognised expertise and contributes genuine added value: