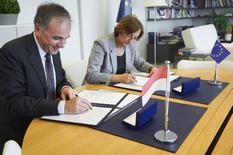 Through this agreement, Monaco is reaffirming its support for the Council of Europe by pledging a minimum amount of EUR 240,000 to support this Institution's activities for the period of 2018-2019.

The projects financed by the Prince's Government are in line with the Principality's priority areas of involvement abroad and concern, in particular, five areas of activity in which the Council of Europe has demonstrated recognised expertise and brings real added value.  These are:

-          Action plan on the protection of refugee and migrant children in Europe;

-          Strengthening the effectiveness of the European Court of Human Rights;

-          Support for the implementation of the Budapest Convention on cyber crime;

-          Helping to meet sustainable development goals relating to environment, protecting biodiversity and climate change (SDGs 13 and 15) through the Bern Convention.

In view of the budgetary circumstances with which the Council of Europe is currently faced, the Ambassador also signed an agreement on the payment of a special contribution of EUR 8,000 to GRECO (Group of States against Corruption) to support the activities of this body, in 2018.

Finally, EUR 50,000 was paid by the Principality to support the Organisation's action to combat money laundering and the financing of terrorism in the States and territories covered by MONEYVAL.*