Reception in Paris to celebrate anniversary of H.S.H. the Sovereign Prince’s accession 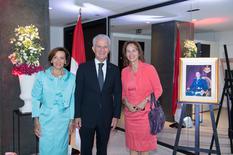 The Principality of Monaco’s Ambassador to France celebrated the anniversary of the accession of H.S.H. Prince Albert II at Pavillon Vendôme, in the heart of Paris’ first arrondissement, on 9 July 2018.

More than 400 guests were welcomed by H.E. Mr Claude Cottalorda and his wife, including
H.E. Ms Ségolène Royal, former minister and France’s Ambassador for International Negotiations on the Arctic and Antarctic, as well as numerous ambassadors, senior officials from French ministries and institutions, members of the National Assembly and senators, and the leaders of major French businesses.

The reception was also attended by a number of representatives from international organisations based in Paris as well as Monaco’s honorary consuls in France, who had held a working meeting at the Monegasque Embassy during the morning.

Monegasques and friends of Monaco living in Paris and the Ile-de-France region, including students from the Monaco Foundation in Paris at the University of Paris International Campus, were also invited to the event.

Having recalled the ancient links between the Principality of Monaco and France, the Ambassador used his speech to focus on the actions being pursued by the Prince’s Government to secure the “Monaco of tomorrow”: from redeveloping land to growing the digital economy.

H.E. Mr Claude Cottalorda also discussed the many initiatives being undertaken by Monegasque entities at the behest of H.S.H. Prince Albert II of Monaco to safeguard the future of the planet and, more specifically, to protect the seas and oceans.

Finally, after a toast to the royal family, the guests had an opportunity to sample some Mediterranean dishes in a genial atmosphere.