Reception in Berlin to mark anniversary of H.S.H. the Sovereign Prince’s accession 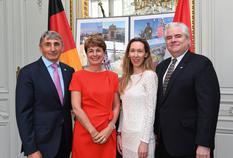 On 8 July 2019, the Embassy of Monaco in Germany held its traditional reception to mark the anniversary of H.S.H. Prince Albert II’s accession. The event took place in the prestigious Patrick Hellmann Schlosshotel.

H.E. Ms Isabelle Berro-Amadeï, together with her husband and diplomats from the Embassy, welcomed nearly 200 guests and friends of the Principality, including the Head of Protocol for the City State of Berlin, the Apostolic Nuncio and many ambassadors accredited to the German capital. Also in attendance were Monaco’s honorary consuls in Germany and Poland, the co-presidents and members of the Monaco International German Club, as well as various figures from the worlds of business, finance and culture.

In her speech, the Ambassador recalled the personal commitment of H.S.H. the Sovereign Prince and his Foundation to environmental causes, and presented the action taken by the Principality in this area. She noted that the German branch of the Prince Albert II Foundation would be celebrating its tenth anniversary on 4 December in Potsdam. H.E. Ms Isabelle Berro-Amadeï also presented the ambitious Extended Monaco project and highlighted the Prince’s Government’s efforts to promote and protect women’s rights.

As is customary, the reception was preceded by a meeting held that morning with Monaco’s honorary consuls in Germany and Poland. Mr Justin Highman, Director of Monaco Invest at the Monaco Economic Board (MEB), gave a presentation on various aspects of the Monegasque economy and MEB’s prospects for engaging in collaboration abroad. The consular meeting was followed by a lunch at the Ambassador’s Residence, to which the consuls’ spouses were also invited.