Reception at Monaco’s Embassy in Italy to mark the anniversary of H.S.H. the Sovereign Prince’s accession 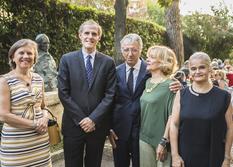 On 12 July 2018, the traditional reception to celebrate the anniversary of H.S.H. the Sovereign Prince’s accession was held in the gardens of the Monegasque Ambassador’s residence in Italy.

H.E. Mr Robert Fillon, the Ambassador, and his wife, assisted by Second Secretary Ms Martine Garcia-Mascarenhas and the full Embassy team, received more than 300 guests, including officials, diplomats and friends of the Principality. In addition to representatives from the Italian Ministry of Foreign Affairs and the Apostolic Nuncio and Dean of the Diplomatic Corps in Italy Mgr Emil-Paul Tscherrig, the ambassadors from France and Switzerland, H.E. Mr Christian Masset and H.E. Mr Giancarlo Kessler, also attended the event.

Musical entertainment was provided by Italian group Emilia Zamuner, lending the affair a congenial atmosphere and encouraging guests to linger until late.

As is customary, the reception was preceded by a consular meeting held during the day, at which Mr Michel Bouquier, Technical Advisor at the Ministry of Finance and Economy, presented the Monaco Private Label programme and answered questions from Monaco’s consuls in Italy.

Monaco’s Ambassador to Italy is also accredited to Slovenia, Croatia, Romania, San Marino and, from this year, the Republic of Malta.