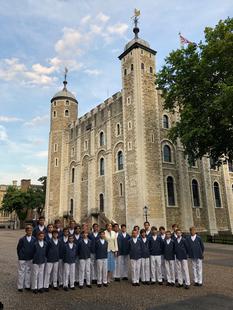 H.E. Ms Evelyne Genta, Ambassador of Monaco to the United Kingdom, surrounded by the Little Singers of Monaco © DR

On Sunday 7 July, the Principality’s Embassy in the UK welcomed the Little Singers of Monaco to London, as the choir embarks on a concert tour of Britain.

That same evening, by special permission, the choir gave a performance at the city’s Chapel Royal of St. Peter ad Vincula. This historic chapel was constructed in the sixteenth century during the reign of Henry VIII and is the burial place of some prominent figures from that period.

Around 40 guests of the Embassy and members of the Chapel’s congregation were granted access to the Tower of London after hours to attend the Little Singers’ first UK concert in a unique setting.

The following day, the choir performed at the Swiss Church in London, before an audience including several ambassadors and members of the diplomatic community in London. The church, which is still an active place of worship, was recently renovated to enable it to host artistic events and provided great acoustics for the young performers.

The Little Singers will continue their tour with a concert at Notre Dame de France, their third and final performance in the British capital, before heading for the north of England and Scotland.