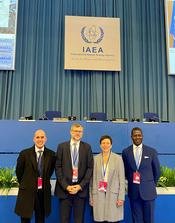 The 65th Session of the International Atomic Energy Agency (IAEA) General Conference was held in Vienna from 20 to 24 September 2021, with a delegation from the Principality of Monaco in attendance.1

The aim of the conference was to set out the IAEA’s work for the coming year and to adopt resolutions on nuclear safety and security, the verification regime and safeguards, and the Agency’s work on peaceful use of nuclear science and technology.

In her speech during the general debate, Isabelle Rosabrunetto reiterated Monaco’s support for the IAEA’s work, particularly in the area of peaceful applications of nuclear science and technology to protect the environment and human health.

On the issue of environmental protection, the Director-General of the Ministry of Foreign Affairs and Cooperation also emphasised that 2021 marked the sixtieth anniversary of the founding, in Monaco, of the IAEA Environment Laboratories. For 60 years, the work of these laboratories has been an important tool in improving understanding of how nuclear applications can be used to help conserve marine and land environments, and to combat the effects of climate change, particularly on the oceans.

Regarding human health, Isabelle Rosabrunetto recalled that the Principality of Monaco had long supported the Agency in its work to fight cancer, particularly cancers affecting women, through its assistance to the Programme of Action for Cancer Therapy (PACT).