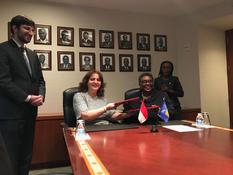 On Wednesday 5 December, Barbados became the 141st state to establish diplomatic relations with the Principality of Monaco.

Permanent Representatives to the United Nations H.E. Ms Elizabeth Thompson and H.E. Ms Isabelle Picco signed joint communiqués in which the two nations committed to further developing the ties of friendship and cooperation between them.

A small, developing island state in the Caribbean, Barbados has been a member of the United Nations since 1966.

With both nations deeply involved in issues relating to the oceans and the law of the seas in particular, the permanent representations often advocate similar positions at the United Nations, ensuring that the voices of small states with shared concerns about the future of the planet are heard.