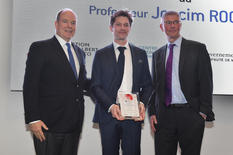 As part of Monaco Ocean Week, H.S.H. the Sovereign Prince presented the Prince Albert II of Monaco – Institut Pasteur Award to Professor Joacim Rocklöv on Thursday 28 March. The award recognises a researcher who has made a particular contribution to the study of the impact of environmental changes on human health.

It falls under the framework agreement signed between the Institut Pasteur, the Prince Albert II Foundation and the Prince’s Government on 21 December 2010, which provides for the funding of joint projects to combat emerging diseases, access to training for scientists and healthcare staff in the least developed countries, and the organisation of scientific or charity events associated with environmental protection.

The award is funded by the Prince’s Government and follows on from the agreement which, since 2010, has brought together the Monaco Scientific Centre, the Prince Albert II Foundation and the Institut Pasteur to consider the impact of environmental changes on human health.

Joacim Rocklöv, who is Swedish, is Professor of Epidemiology in the Sustainable Health Section of the Department of Public Health and Clinical Medicine at Umeå University and Associate Researcher at the Heidelberg University Institute of Global Health.

His research focuses on arboviruses, and particularly on the epidemiology of the Zika and dengue viruses. Thanks to his expertise in statistics, he was able to develop a mathematical model that can predict dengue epidemics depending on the activity of the Aedes Aegypti, or yellow-fever mosquito. This means that early warning systems can be put in place.

At the same time, he has been involved in interdisciplinary public health activities that bring together health and climate scientists, economists and policymakers, and was invited to join the Lancet Countdown expert group as a specialist in vector-borne diseases. He has also contributed to IPCC and WHO reports.